After tearing through the first volume of Blade Runner 2019, you’ll be desperate to discover the fate of LAPD’s best Blade Runner and detective Aahna ‘Ash’ Ashina…

Seven years later and living under assumed identities, Ash and Cleo have resurfaced on one of the Off-world mining colonies. But Cleo’s father has never stopped looking for them, sending out dozens of bounty hunters and search parties to kill Ash and bring his daughter home. Now, following a bloody Replicant mutiny, Ash and Cleo have become separated and a ruthless new Blade Runner called Hythe has Ash dead in her sights.

“A philosophical science fiction action noir. Green and Johnson are creating their own genre now. I, for one, am all in.” – Nerdly

The second volume of Titan Comics’ critically acclaimed Blade Runner 2019 comics is available for pre-order now, or you can grab #5-7 digitally… 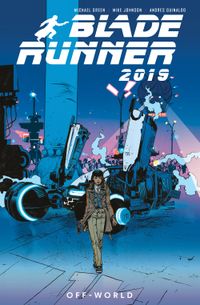 US, Canada and rest of world can order from Amazon