“I spent so long trying to fix you, Chloe. I forgot that I’m just as broken. It was me…who wasn’t at peace.”

Max is at it again, jumping through parallel universes to a place that might hold the key to a stable future. The world can be a testing labyrinth of actions and consequences, leading you down winding paths, or dead ends. How will Max cope on a path that leads towards Chloe, but in a different way to what she has known?

Beloved heroines Max and Chloe return, in the official Life Is Strange comic series, spun out of the BAFTA award-winning video game. Three years after the events of Life Is Strange: Dust, Max Caulfield has been left stranded on the shores of an unfamiliar reality. Her new world seems too good to be true: Rachel, a girl who suffered a terrible fate in Max’s timeline, is alive and well, and with Chloe. But as echoes of other timelines ripple through past and future, a mysterious boy named Tristan reveals the harsh reality behind Max’s blissful new world…

Introducing a new character is never easy, but Tristan fits in so well to Max and Chloe’s world, I wish he was in all of their realities.

“Another knockout issue for the videogame adaptation series. The dialogue, story, emotions, and art are each complex and compelling” – ComicCon

“One of the best comic books to be based on a video game, if not the best of this particular sub-genre” – Multiversity Comics

“The artistic choices are spot on, as they have been since the inception of the comic series, and the writing never feels out of character” – The Xbox Hub

“Not to be missed” – Culture of Gaming 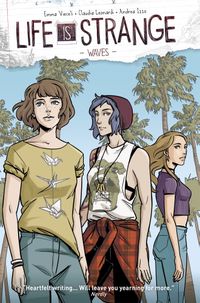 USA and Canada can order from Amazon