Over the decades, many craftspeople have been involved in bringing the fastest hunk of junk in the galaxy to movie screens. In the latest issue of Insider – on sale now – some of the artisans discuss the part they’ve played in turning the design icon into one of the enduring stars of Star Wars – and here are two of them… EDDIE GALLEN: Extreme scaffolder, Star Wars: The Last Jedi (2017) For A New Hope (1977), a “full-size” prop of the Millennium Falcon exterior occupied the Docking Bay 94 and Death Star hangar sets (which were built around it), but only about a sixth of the ship was actually made (notice that in live-action shots, the ship is only seen from the cockpit side). The rest was filled in with a matte painting. For The Empire Strikes Back (1980) a complete Falcon exterior was constructed, but again it was only used on a soundstage at Elstree Studios, London. In The Last Jedi, the Millennium Falcon spent time on location which meant the life-sized prop had to be rugged enough to survive the elements at Malin Head, the northernmost point on the island of Ireland. Eddie Gallen, a scaffolder by trade, was hired to assemble the iconic ship – or as much as they needed for filming. Having realized this would be no ordinary task, the producers knew they needed someone with serious scaffolding experience to prepare platforms that would support the prop safely and protect the local landscape. Gallen had previously erected platforms for archeologists restoring walls and huts on Skellig Michael (another Ahch-To location used in the movie), so he was the natural choice. 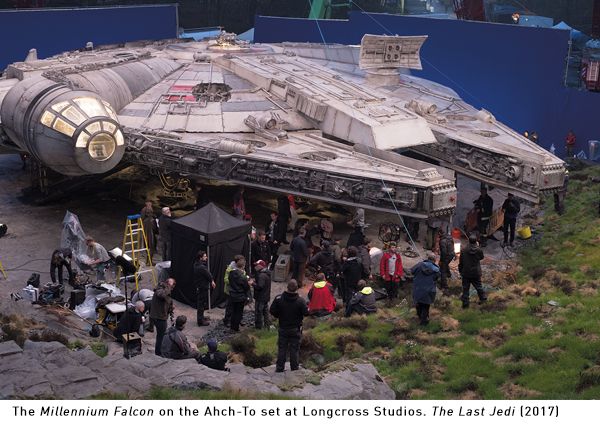 “The art director and construction manager took me up to the head, where the cliffs are, and that’s when they told me I’d be building the Millennium Falcon!” recalls Gallen, who didn’t believe them at first. “I said, sarcastically, ‘Right…,’ but it was true!” It even said so on his contract.

The Millennium Falcon prop that had already seen use at Longcross Studios was dismantled, and roughly a third of the underside, the landing gear, and the landing ramp were shipped to the Malin Head location for Gallen and his crew to reassemble on site.

“We built the support system, which was heavy duty because it was so exposed to all sorts of weather, the sea, and high winds,” he explains. “We had to make sure it would basically hold the Millennium Falcon together throughout the filming.” It took two weeks to prepare the site before work began on erecting the Falcon itself, which had to be securely fixed to the platform. “The main hull was pretty straightforward,” says Gallen. “The finer parts: the legs, the gadgets, and those types of things were slower and more complex.” This Falcon was fitted out with a few special modifications for its scenes on Ahch-To, which included waterproofing and larger water sprayers attached to the top to simulate rain pouring off the ship’s hull. 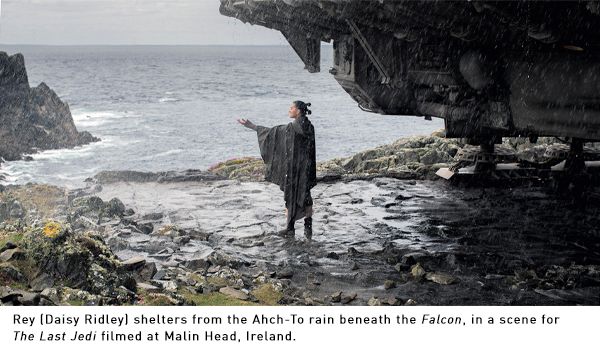 “The attention to detail was unbelievable,” Gallen adds. “I’d never seen anything quite like it. It was a credit to the prop makers who built it.” CHARMAINE CHAN: ILM digital compositor, Star Wars: The Last Jedi Decades after ILM had used physical models of the Millennium Falcon to wow audiences, the ship was rendered digitally by the time of the sequel trilogy. The use of traveling-matte photography, whereby multiple film elements were composited together with models, paintings, or live-action footage to build a kinetic final shot, had also been replaced with digital technology. Charmaine Chan, virtual production technical director at ILM, and lead compositor for Season One of The Mandalorian, worked on shots involving the Falcon for The Last Jedi. “It was always daunting to work on a Falcon shot,” admits Chan, whose job was to make images from disparate sources work together seamlessly, as if filmed in-camera. “We wanted to keep it as true to the original as possible, so we were constantly referring back to the older films. I looked at a lot of things in terms of light, composition, how the ship interacted with its environment. The Falcon is not super reflective in any way, it’s more matte, so we had to consider how different light would react with it. 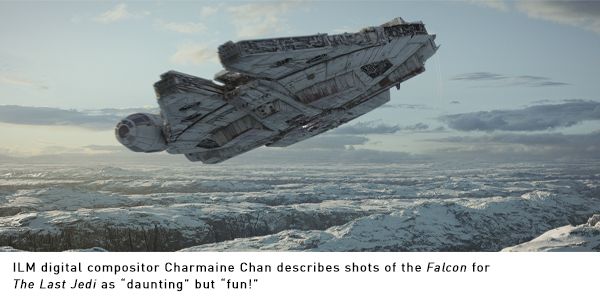 The Battle of Crait offered other challenges to the compositor. “We had a few shots were the CG Falcon flew in, shot at a bunch of TIE fighters, flew through the crystal caves, things like that,” says Chan. “There were also interior shots in the Falcon cockpit with Chewbacca and the porg puppets playing around. That was fun because it involved the practical set.” The scene entailed extending the Falcon hallway and adding CG porgs to supplement or enhance the live-action puppets. “There were certain times we wanted the porgs to interact with the cockpit panels, and sometimes you can’t do that with a puppet,” says Chan. The shot of the crystal foxes emerging from a cave as the Millennium Falcon swept by was another interesting challenge. “With that shot, we wanted to give a feeling of hope. A lot of what we create is determined by what we want audience to feel in the storyline,” says Chan. “As a compositor, you have to balance things out so you can visually tell the story.” HURRY! Today is the last day to take advantage of our special subscription offer! Subscribe to Insider this week and you can save 44%! Get 8 issues for just $44.99 - saving $34.93 off the newsstand price - click HERE to subscribe and enter the promotion code MAY4.
Copyright © Titan Comics 2012 - 2022 © Titan Magazines 2012 - 2022