2021’s best-selling non-premier comic is back for a blockbuster new series! Hard Case Crime founder and editor, Charles Ardai – also an Edgar and Shamus award-winning writer – talks about Gun Honey: Blood for Blood… Titan Comics: Gun Honey was such a hit it’s been brought back for a second series. What do you think has been the secret to its success? Charles Ardai: Gorgeous covers, by some of the best artists in the business. A story that delivers knockout plot twists issue after issue. A character you love to watch get herself into and out of trouble. If I weren’t writing it, I’d be one of our readers for sure. The first series saw Joanna helping the U.S. government with their request to bring down a criminal. Will Joanna be working with them again in this series? Yes and no. One of the government agents we liked is back, but there will be several others you won’t like much at all – along with one former agent who’d like to see Joanna dead. 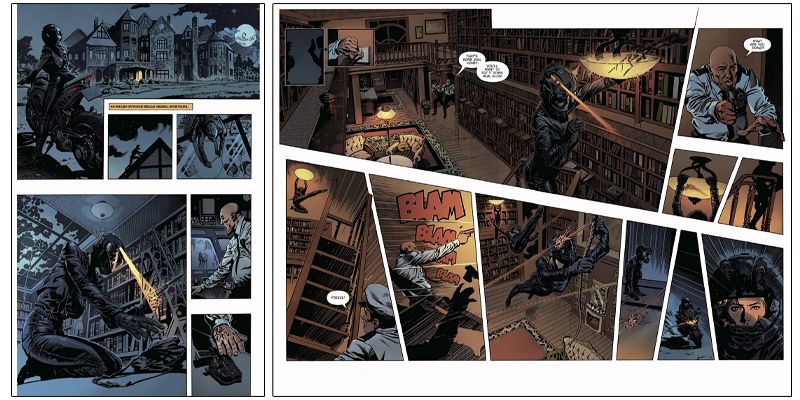 What is it about Joanna that you think has proven so popular? She’s self-made, self-reliant, very capable – this woman is the best in the world at what she does and she makes no apologies for it. Even though it happens to be against the law. That kind of confidence and competence is exciting to see, in the same way that it’s fun to watch James Bond or Tony Stark do what they do. It’s especially fun to see a woman in that sort of confident role for once. Where did the inspiration for Gun Honey come from? A writer friend of mine named Euny Hong was thinking of writing a book for us but only wanted to if she could do it under a pen name. I used an anagram for my own pen name, so I tried to come up with one for her – but what I came up instead was “GUN HONEY.” Not a good pen name, but an excellent title, and when Euny didn’t use it, I took the ball and ran with it. What was your favorite part to write in the upcoming series? Oh, man, there were so many! At one point Joanna is trapped in Italy and she has to escape three times in a row, in one night. Later, she infiltrates a charity event in Monaco disguised as a showgirl. But my favorite may be when she breaks into a moving RV that’s going 50mph down a highway. What do you think fans will like the most about series two? This new story really pushes Joanna to her limits – she has an enemy who’s just as skilled as she is, physically stronger, and probably a better chess player. In a situation like that, you can’t even take for granted that Joanna will survive. Will there ever be a GUN HONEY 3? You’re just gonna have to wait and see.