In the final arc of Blade Runner: Origins, LAPD detective Cal Moreaux teams up with an escaped experimental Replicant, who has been uploaded with the memories of the dead Tyrell Corporation scientist, whose suicide he was sent to investigate. As the final issue of the first year of the comic goes on sale next Wednesday, we talk to one of the joint writers, Mellow Brown.

This is the end of the first year of Blade Runner: Origins. What lies in store for Cal Moreaux? MELLOW BROWN: Well, Cal is going to go through some big changes and the final stage of his transformation into a Blade Runner. To get there, he’s going to go through all-out war! It’s been a fun ride, do you have a stand out moment from the first year that you loved working on? MELLOW BROWN: Thank you! Oh absolutely. I will always be in love with #6’s moment when we revealed the secret of Cal’s jacket. I wanted to tell the origin of the Blade Runner coat, how so many of them are able to take a hit by Replicant and make the reason unique to Cal’s personality. Like all writers, I’m sure you mapped out the story really well before writing, but did anything occur during the process that you didn’t expect? MELLOW BROWN: I think many of Asa and Nia’s characterizations became solid while we wrote. Perkins dd such an amazing job defining Asa’s identity struggles as he realized he was a person pulled between two worlds. And Nia became this really loving matriarch to her own school of Replicants. How does the writing workload work when sharing responsibilities with other writers, does one of you do one thing, like focus on dialogue, and another does characterization, or do you share it all? MELLOW BROWN: The Blade Runner series functions as a giant spider-web of mystery. We each focused on the storylines that were necessary and chosen for this epic. The ones we all felt we could provide the most characterizations for. Teamwork all the way. Some artists do warm-up drawing to get into the headspace. As a writer, do you have any similar techniques to get you ready, or do you just jump right in? MELLOW BROWN: I consider myself a “Grindhouse writer” at heart. Every issue, I try to find the moment that will hit the reader the hardest and impact you in a way that feels emotional, raw or relentless. Once I have that moment, I write towards the goal of making that moment work. What’s your favorite thing about writing comic books? MELLOW BROWN: The lack of limitations! When writing in film and animation, I have to keep in mind that I could accidentally write a page that could cost a million dollars. In comics, I can just tell the best story I can possibly tell.

Pre-order Blade Runner: Origins #12 from in the U.K. from Forbidden Planet, from the U.S. HERE, or digitally HERE

Set ten years before the events of the critically acclaimed Blade Runner 2019 comic book series and the original Ridley Scott film, this in-cannon prequel sees the birth of the Blade Runner Department… catch up with the first year of Blade Runner: Origins… Blade Runner: Origins Vol.1: Products When the body of a Tyrell Corporation scientist working on an experimental new type of Replicant is discovered in her laboratory, an apparent suicide, LAPD detective Cal Moreaux is assigned to the case. Determined to find the truth behind the seemingly routine suicide, he encounters a deadly conspiracy within the Tyrell Corporation itself. 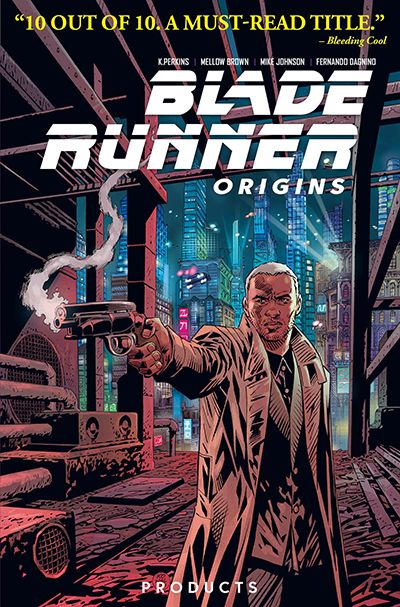 Buy now from Forbidden Planet, Amazon, and digitally. Blade Runner: Origins Vol.2: Scrap Someone is triggering psychotic breakdowns in the Nexus 4 Replicant population, sending once obedient servants on homicidal rampages. Ex-LAPD Detective Cal Moreaux has been ordered to hunt down and kill the instigator. Tasked by Tyrell Corp executive Ilora Stahl to find a rogue Nexus 5 prototype, believed to be responsible for the attacks, Cal’s hunt has brought him back to the slum sector of LA where he and his sister grew up. Now, with time running out, Cal must unlock the shocking secret that led a Tyrell Corp scientist to commit suicide, and stop the renegade Replicant before it can corrupt the entire city. 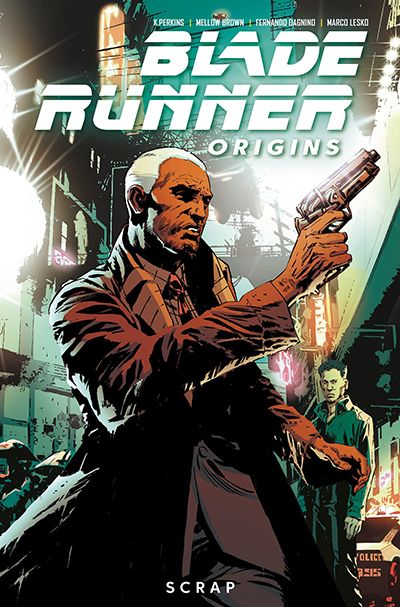 Buy now from Forbidden Planet, Amazon, and digitally. Blade Runner: Origins Vol.3: Burning The slums of LA are ablaze. Tyrell executive Ilora Stahl, head of a secret program to transfer human consciousness into Replicant hosts has launched an all-out attack determined to flush out and kill a renegade Replicant called Nia, who was once part of her covert programme. Having escaped, Nia has been triggering logic short-circuits in the organic programming of once loyal Replicant servants, causing them to rebel against their human masters. Now as Ilora’s security force of Replicants attack the city, ex-LAPD detective Cal Moreaux has teamed up with an escaped experimental Replicant called Asa, who has been uploaded with the consciousness of a dead Tyrell scientist. Together they must expose Ilora’s conspiracy before the city burns to the ground. 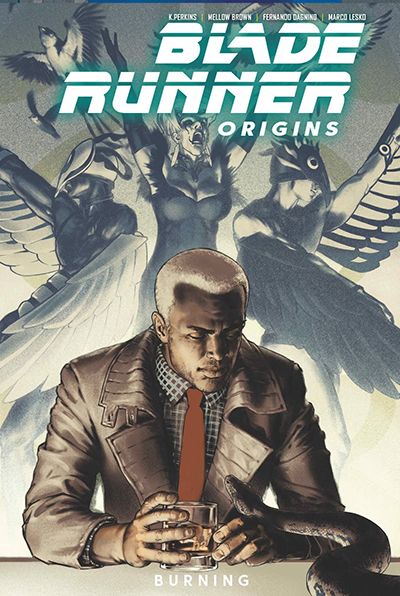