As we continue our countdown to Star Trek Day on Thursday, today we’re talking to the very first editor and the latest editor of Star Trek Explorer – and they’re one and the same, the brilliant John Freeman!

TITAN COMICS: What is your earliest memory of Star Trek? JOHN FREEMAN: Watching it when the show first aired here in the UK back in July 1969, and reading the strip in Joe 90 comic. Interest in all things space was at fever pitch, and I remember my mum waking me up to watch the moon landing a few days later. The future was everywhere! How did your relationship with Star Trek begin? Mainly through the show, which was hard to catch back in the days before video recorders – and the BBC [the UK broadcaster] didn’t even show some episodes of the original series until the 1990s. We relied on the adaptations by James Blish to relive the stories. But it was so groundbreaking, the variety of storylines, from alien intruders to time travel, sparked my imagination, just like a lot of the science fiction I was reading. You were the very first editor of Star Trek Monthly when it launched 27 years ago, what were your highlights of that era of the magazine? It was an exciting time, not just launching Star Trek Monthly, but setting up the whole magazines arm at Titan. I think getting out to Los Angeles and walking the sets of Voyager and Deep Space Nine, and meeting the behind-the-scenes effects team while they were working on First Contact would probably count as highlights any fan would identify with.

You are taking over from previous editor, Nick Jones, from issue 5 of Star Trek Explorer, what are you most looking forward to working on, and what can readers look forward to in upcoming issues? The magazine has changed a lot down the years and right now I’m settling into the role. We’ll be celebrating 30 years of Deep Space Nine in early 2023, and I’ve just pitched the first fiction proposals for my first three issues. I’m looking forward to getting my teeth back into reporting on the creative energy behind the different series; the cast, crew, hearing fan views. I’ve got some ideas for some new elements, but it’s early days! Star Trek fiction returned to the new-look Explorer, what can you tell us about the upcoming stories and authors to be featured? Issue 4 – on sale September 20 in the US/CA and October 20 UK/Eire – sees Dr. Crusher and Worf star in a short story by Voyager writer Lisa Klink; and Geordi La Force appears in a short story by Peter Holmstrom. Look out for some great DS9 stories in the New Year! With so much new content coming into the Star Trek universe, what are you most looking forward to in 2023 and beyond? I’m not playing favorites this early!. And, leaving the most controversial question to last, who is your favorite captain? It has to be Kirk, played by William Shatner, in the original series, simply because I grew up with the character, on screen and in fiction. But they’re all great! 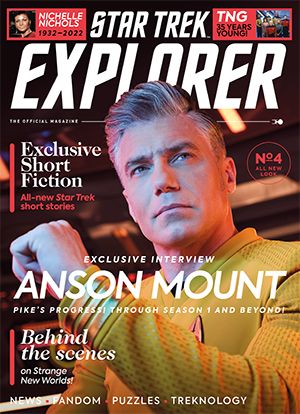