Revenge of the Binks 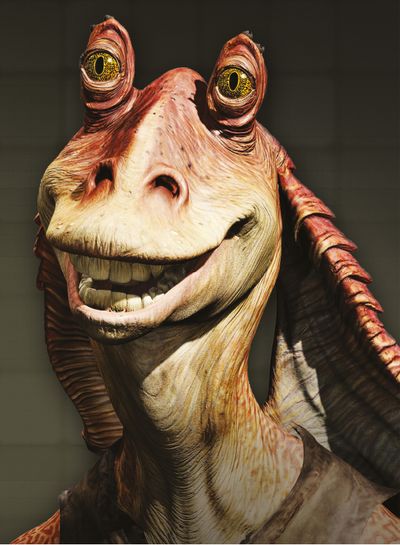 STOMPING TO SUCCESS!
Being a lifelong Star Wars fan, Best was blown away when George Lucas chose him for the first new Star Wars movie in 16 years, The Phantom Menace. Then 23, he had been performing in the Broadway blockbuster Stomp when Episode I casting director Robin Gurland spotted him in the show and summoned him for an audition based on Best’s unique and creative physicality on stage. Her hunch — that Best’s physicality would be the perfect basis for the digitally animated character her boss had in mind — was confirmed when Lucas cast him after a motion capture audition.

“When I showed up,” he recalls, “I was like, ‘Do they realize I’m not supposed to be here? I’m just a kid from the Bronx.’ The learning curve was pretty big for me, going from a Broadway show to one of the biggest movies of all time. But I couldn’t be afraid. I knew I had to completely believe in George Lucas.”

That meant believing in Lucas’ vision for the character who would be animated literally on top of Best. On the set, the actor wore a makeshift Jar Jar suit and tall headpiece, so his fellow cast mates would have a real actor to interact with, and most importantly, so the artists at ILM would have a human reference. Beyond providing Jar Jar’s distinctive voice, Best’s performance was also the inspiration for Jar Jar’s movements. Back in the late-1990s, it was something that had never been done before.

“It wasn’t just doing Star Wars, which was enormous, but it was actually taking this risk,” he says. “It was making film history as the first all digitally-animated [main] character in a live-action movie. To set the template for that was the most exciting thing for me. Following that, Andy Serkis did it for Gollum (in The Lord of the Rings), but being the first guy to do it was really important to me. I take a lot of pride in that. It’s not recognized very much, but I’m very proud that I was the first person to take that risk.”

JAR JAR ACROSS THE WORLD
Shooting Episode I in England and Tunisia, near the locations used for the original A New Hope was, “very surreal. I never really processed how big things were. I was just going along for the ride, because it was my first major film and it was Star Wars. I remember sitting in the dressing room one-day thinking, ‘Well, it’s all downhill from here. You can’t get bigger than this.’”

Indeed, the anticipation for The Phantom Menace was massive, and for a while, Jar Jar was everywhere, his smiling visage adorning everything from pillowcases to soda cans. Not surprisingly, Best’s personal favorites are the ones he finds the funniest. “There were some that were absolutely ridiculous,” he laughs, “like the lollipop thing — do you remember that? It was Jar Jar’s face and then as soon as the mouth opens, a lollipop comes shooting out like a tongue. I was thinking, ‘This thing is not good, man! Somebody needs to re-think this!’

“There was Jar Jar saturation,” he continues, noting a curious amount of Binks merchandise that, like the lollipop, seemed centered around Jar Jar’s tongue. “The tongue was a big deal. Some of the merchandise was crazy. Who wants to eat a Jar Jar tongue Fruit Roll-Up?”

But make no mistake: Ahmed Best remains a fan and declares that, a decade on, The Phantom Menace still holds up. “It came on cable the other day, and I was watching it and thinking, ‘This movie is a good movie.’ As a piece of film, as a story, it works fantastically. It is well done, well thought out, well executed, and it sets up the trilogy very well. My favorite person in the movie is Liam Neeson. He’s so good in it — you didn’t want Qui-Gon to die.”

The Oscar-nominated Neeson was just as impressive on the set — although his co-star didn’t realize it at first. “I would watch Liam while we were acting and it didn’t look like he was doing very much,” Best says. “Honestly, I didn’t see him doing anything. Liam has this soft demeanor about him. I had to be huge. George is telling me, ‘Bigger, funnier, jump higher,’ so I have to be enormous in the scene and Liam is doing almost nothing.

“But when I looked at the playback on the monitor, I thought, ‘This is amazing — this guy is doing more stuff than I’m doing with a back flip.’ He was like a Film Acting 101 course for me. He’d move his eyebrow and it would mean 10 times more than me doing three flips in the water. He was the person I learned most from on-set — I really enjoyed watching him and learning from him, and hearing his stories. We laughed a lot. It was great.”

UNDERWATER ACTION!
Along those lines, Best said one of his favorite Episode I memories is of himself and Neeson, along with Ewan McGregor, filming their scene in the tri-bubble bongo submarine after leaving Otoh Gunga. “That was one of the funniest days,” Best recalls. “Your imagination daydreams about what shooting Star Wars is going to be like, and you think, ‘Oh, there’s going to be a starship, and we’re going to walk into it, and there’s going to be all this high tech stuff moving around, and ships flying at you.’ But we get in the ship, and there are two Englishmen shaking it back and forth on sticks. It was the most low-tech experience that you could have!”

Best said the day devolved into silliness for everyone. “Here was big Liam in the back seat of this big old submarine and Ewan and me in the front seat pretending to swim through the ocean, and so many ridiculous lines that I didn’t know what they meant — nobody knew what they meant because it was in gibberish Jar Jar speech. So I go to George and ask, ‘Hey George, what does this mean?’ And he goes, ‘I don’t know — just say it!’ I’m like, ‘What? Didn’t you write this?’ Shooting that submarine scene is one of my fondest memories.” 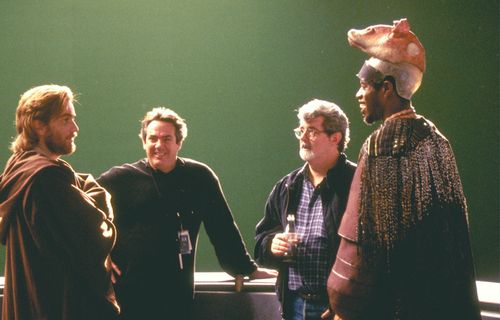 The good times translated to Best’s performance as the most overtly comedic character in the Star Wars canon. “It felt like a Buster Keaton kind of role,” Best says of the beloved silent film comedian who influenced him. “I was trying to channel that kind of energy to the character.”

However, some fans and critics were not amused. “They really wanted to see a dark, serious story. They had their expectations.”

The backlash hit hard. “It was so shocking because we were all very excited while we were doing it,” Best says, adding, “But Jar Jar was never for 35-year-olds. He was for the six-year-olds. So among six-to-10 year olds, I am incredibly popular.”

Best notes that when kids find out he played Jar Jar Binks, “They go bananas! They go crazy! Recently, my nephew, who is four years old now, saw Star Wars, and he saw my name on the screen and he asked, ‘Why is Uncle Ahmed on the screen? Who was he?’ My sister told him that Uncle Ahmed was Jar Jar, and now I’m a hero. He didn’t want to have anything to do with me before that. The magic of George Lucas helped me be cool with my nephew.”

Read the rest of the interview in Star Wars Insider: Aliens, Creatures & Droids – on sale now – to find out about Best’s experiences on the other two prequel movies, reprising his role on Star Wars: The Clone Wars, and the debt he owes to Jar Jar! 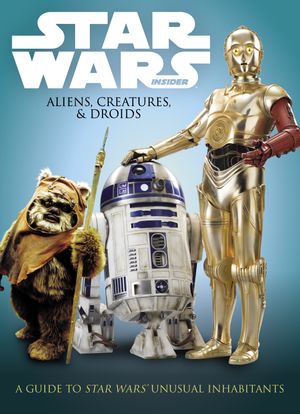 Buy from Amazon in the U.S. & Canada.
Buy from Forbidden Planet in the U.K. & Europe.