Revenge of the Fifth!

Christopher Lee will go down in cinematic history as one of the most prolific actors that ever lived. However, now is not the time to wax philosophical about the man who breathed life into Count Dracula but rather to delve into the mind of the man who portrays Count Dooku. Recently, the soft-spoken actor gave his views on George Lucas, the story at large, and the corruption of the Jedi. 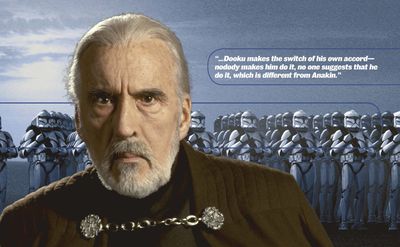 Now that you’ve played the character in two movies what do you find fascinating about Count Dooku?
For one, his name, which means “poison” in Japanese. Something I’m sure George probably knew. It’s a very appropriate name because he’s very lethal. The character himself is fascinating in many respects because he’s a Jedi, one of what they call the lost 20. Just playing a Jedi in and of itself is a unique experience, I would say, for any actor because very few are alive in the Star Wars world at the time. Dooku is also an antagonist – a Sith Lord. And there aren’t many of them either. Being a Sith suggests that he has immense powers, both physical and material, and he’s unstoppable.

During your career, you’ve dabbled a little bit in science fiction, although Star Wars is more science fantasy. But has anything really come close to this?
Many years ago, I appeared in one of the very first science-fiction television shows, Space 1999, opposite Martin Landau. But no, I’ve never done anything like this.

The time frame is a little bit more far reaching as well, eve more so than The Lord of the Rings?
I was talking with George recently about the time frame when all the events in the prequels are supposed to be happening, and he said Star Wars is millions of years old. The Lord of the Rings was only supposed to take place a mere 7,000 years ago in Middle-earth, which as far as Tolkein was concerned was somewhere near Oxford in the countryside.

The movies you’ve recently starred in have been very CGI intensive. What has been your experience working primarily in front of bluescreen?
I have actually done a lot of bluescreen work in my life. I’ve also done greenscreen and even yellowscreen at Disney. It’s really all the same. But with each successive year, something incredible seems to happen, and technologically, you find things that make it easier for people to produce these amazing effects. When doing a film, I read the script so I know what the scene is about and I know what I’m supposed to be doing – but I don’t know what it’s going to look like behind, in front of, below, and above me until I see the film. And it really is mind-boggling how the (special) effects are implemented.

Because to know would be like peeking behind a magician’s curtain?
It is magic, and magic can be created in many ways. It’s like a magician who stands in front of an audience and says, “Look, nothing up this sleeve, nothing up that sleeve. Now, come with me into my magical world.” The audience has no idea, except, perhaps a few specialists, how the effects are actually done. I don’t want to know how it’s done because I want the experience to be pure.

Did you work in front of the bluescreen in the Lord of the Rings films as much as you did so for Episode II and III?
For The Lord of the Rings, there was a certain amount of bluescreen work to be done but nothing like this. When I saw those films, I never thought that what I was seeing was special effects – I believed it implicitly. Just as it got to the point where I didn’t think of the performers as being actors and actresses dressed up playing parts, I believed them to be real people. I can also suspend this belief – or if you like, disbelief – while watching Star Wars. The people become real. And to the audience, they should be. After all, Star Wars is the ultimate in filmmaking and film viewing for literally millions of people the world over.

And that really is the testament to George Lucas’ overall vision for his films.
This has all come from his head. It’s not from books or stories – he’s done it. Even The Lord of the Rings films come from three books. During filming, I had some relatives visit me on set, of which there were three children. I explained to them, the best I could, about all the cameras, monitors, and things that were around, and they were completely bowled over.

What have you noticed about Ewan McGregor and Hayden Christensen as you’ve worked with them over the course of the two films?
It’s been fascinating for me because I can see within minutes if they really care about what they’re doing, if they really want to make it believable, and if they are dedicated to what they’re doing and devoted to their craft. Ewan has already done quite a few major films and starred in different roles. He’s had a lot of good fortune. What I noticed about him is he is completely involved with everything he does – he goes straight into projects and becomes completely dedicated. That’s what [acting] is all about: dedication and devotion to what you’re doing. You also have to have powers of invention, you have to be imaginative, and you have to have the right instincts.

Hayden is at the beginning of his career, and when I spoke to him recently, we were talking about what an actor does these days. I told him to forget about being rich and famous and concentrate on making your own decisions (about future projects). He knows that [the Star Wars] films are going to make him a big name and grant him a huge following. And for a while, he knows he’s going to have to live with the fact that he will be known for his role as Anakin Skywalker/Darth Vader. But I told him he’s a good enough actor and that he cares enough to learn to play other roles.

Both Count Dooku and Anakin are Jedi who have or will convert to the Sith. How does Anakin’s conversion differ from Dooku’s?
[Dooku] crossed over for personal reasons and became a Separatist because he was disgusted with the way the Republic was functioning. But Dooku makes the switch on his own accord – nobody makes him do it, no one suggests that he do it, which is different from Anakin. He does so without knowing it or even wanting it and becomes enmeshed in a trap by the Emperor.

The corruption of Anakin is ultimate goal, and the approach is very Shakespearean.
In many ways [the Star Wars saga] is like a Shakespearean tragedy. It’s also the same with Tolkein and The Lord of the Rings. Don’t forget that, eventually, good triumphs over evil in the end, and it follows the same course here at the conclusion Return of the Jedi.

There’s also that lust for power.
Yes, and it initially emanates from the Emperor, who is also very corrupt himself. What was he like when he was a young man? Who knows? Because not many people are corrupt from the moment they’re born – it does take time.

Would you say that, like the Emperor, Count Dooku is an evil character – a bad guy.
No, he’s not simply a bad guy. He was good and then he becomes bad. At one time, Dooku was a decent and good man. He obviously holds very strong beliefs. And maybe at one time he was right – maybe the Republic was corrupt and he decided he didn’t want to become corrupt himself. So he said, “I’m going over here and I’m going to start my own group.” Then, of course, it becomes a war, which is another matter altogether. Everyone has a dark side – everyone. The important thing is to make sure the dark side doesn’t overpower the light side.

Celebrate the dark side with Star Wars Insider: Lords of the Sith - on sale NOW!

Buy from Amazon in the U.S. & Canada
Buy from Forbidden Planet in the U.K. & Europe