In Star Wars Insider #210 – on sale today – author Richard Dinnick chronicles General Grievous’ mission to retrieve a Jedi artifact. Insider interviewed Dinnick to find out more! Star Wars Insider: When and where did your personal Star Wars journey begin? Richard Dinnick: As a birthday treat I was taken to Leicester Square [London] to see this new movie called Star Wars. I’d seen the ads on TV and I didn’t think I’d like it because it seemed disjointed! I am guessing that to my young brain the quick cut of all the aliens was just too much! But, as it turned out, I was wrong. I loved it. I was hooked. I soon had the original book and a regular trip to the newsagents to pick up my copy of the Marvel weekly. This is your first piece of writing set in the galaxy far, far away. How does that feel? Utterly joyous. I really feel Star Wars is that: joyous. So, to be part of the galaxy far, far away is not only to have a dream come true but also to share in that joy. Your story concerns General Grievous. How did you find writing a story from a villain’s perspective? It was a little unsettling how much fun I had writing from the villain’s perspective! Perhaps I have a twisted mind. Then again, the villains in Star Wars don’t just twirl their moustaches and go “bwhahahaha!” They have motivation and purpose – reasons for being the people they are. What about the prequel era appeals to you the most? I love that still so much of it is unwritten and the potential that events in the prequel era still have the ability to influence the story – even now. I am a huge Shakespeare nerd so to me the prequels are a classic tragedy – the fatally flawed hero succumbs to the darker side of their nature. The genius of Star Wars is that Anakin is subsequently redeemed, but seeing the way that fall to the dark side happened is wonderful, if heartbreaking. You’ve written comics and screenplays. How does writing short fiction differ? Short fiction is a very different beast. I loved reading the Holmes short stories when I was younger and then moved onto H.H. Monro (or Saki as he’s known) and he wrote some amazing short stories. To me, short stories need to be pithy and to the point with an ending that is both satisfying and a little bit subverting, a little bit left-field. I hope I’ve achieved all of that with “Saber Truth.” If you had the opportunity to write more Star Wars fiction, which character or world do you think you’d have most fun exploring? Wow! That is such a broad question! I have difficulty picking what flavor of ice cream to have when the selection is strawberry, vanilla, or chocolate! I am fascinated by Yoda and his species – Yaddle and Grogu. I’d love to know Shmi’s story, too. Given my military experience I think it would be fascinating to delve into the combat and espionage side of things – or even the policing of the Star Wars galaxy. I’d also like to know more about Endor, Coruscant and especially Alderaan. We’ve explored Tatooine so thoroughly in recent years, it would be fab to have as much in-depth look as those other worlds. But honestly? It would be a privilege – and yes, a joy – to write for any character in any setting. Read Richard Dinnick’s short story “Saber Truth” in Star Wars Insider #210 – on sale today! Find out more here. Subscribe to Insider this week and you can save 44%! Get 8 issues for just $44.99 - saving $34.93 off the newsstand price - click HERE to subscribe and enter the promotion code MAY4. Discover more Star Wars fiction in these two collections: Star Wars Insider: The Fiction Collection Volume 1 18 fully illustrated short stories! Darth Vader confronts a mysterious face from Anakin Skywalker’s past… Lando Calrissian faces the terrifying firepower of an Imperial walker… The Empire’s stormtroopers ruthlessly pursue survivors from Alderaan… A squadron of B-wing fighters engage in a desperate mission during the Battle of Endor. This special edition includes stories from the Legends era and tales from the current era of storytelling that were first published in Star Wars Insider. Featuring stories by Timothy Zahn, Christie Golden, Matthew Stover, Jason Fry, Michael Reaves & Maya Kaathryn Bohnoff, Ryder Windham, John Ostrander, Jeff Grubb, David J. Williams & Mark S. Williams, Ari Marmell, Alexander Freed, and Karen Miller. Illustrated by Greg and Tim Hildebrandt, Jan Duursema, John Van Fleet, Joe Corroney, Brian Miller, Tom Hodges, Brian Rood, Chris Travis, and David Rabbitte. 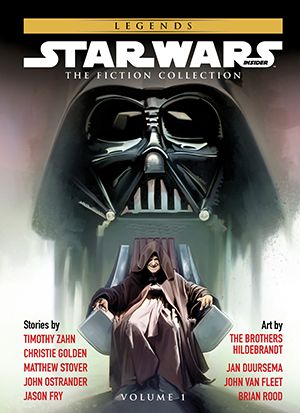 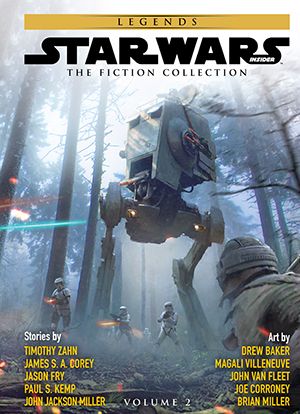