The first issue of the all-new Rivers of London comics story, Monday, Monday hits July 7. If you’ve not yet experienced this magical saga, then let us introduce you…

Written by Rivers of London creator Ben Aaronvitch, with Doctor Who and Vinyl Detective author Andrew Cartmel, the Rivers of London comics stories are woven into the fabric of the stories and have become an integral part of this much love series.

Peter Grant is part of a very special London police unit. Full-time cop and part-time wizard, he works on rather unusual crimes – those that involve magic and the general weirdness that permeates London’s dark underbelly… 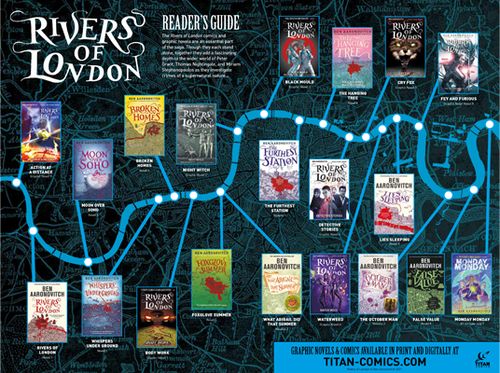 Grant’s latest case begins with a perfectly innocent car on a homicidal killing spree – without a driver. But then, before you know it, there’s a Bosnian refugee, the Most Haunted Car in England, a bunch of teenagers loaded on Ketamine and a seemingly-harmless wooden bench with the darkest of pasts…

The daughter of a powerful Russian oligarch has vanished from her home, apparently taken by a mythical forest creature fresh out of Russian legend. To ‘encourage’ Peter’s cooperation in finding the missing child, his boss Nightingale is kidnapped – and Peter finds himself caught in a tangled web of intrigue where nothing is as it seems!

Peter never saw himself in pest control – but that’s exactly where he finds himself when a killer, sentient, living fungus goes on a rampage of vengeance using its victims’ worst fears against them.

Four self-contained magical crimes, ripped from the streets of supernatural London. As PC Peter Grant faces his gruelling Detective exam, forcing him to relive the strangest cases of his career. From foiling an aspiring god to confronting a Virtual Flasher, Peter’s police history has been anything but conventional; whether that’s chasing down ‘Falcon’ crimes with the aid of modern technology, or confronting timeless villainy with his magical skill-set. Does Peter have what it takes… or will DI Chopra judge him unsuitable for a badge?

Child kidnapping is already an appalling crime, but in the latest case for Detective Constable Peter Grant – newly promoted in the ranks of London’s Metropolitan Police, but with a lot still to learn about wizarding – things take a truly dark turn when the victims become the prey in a homicidal hunt that Grant and members of the Folly must stop! Available from Forbidden Planet; Amazon; and digitally.

It’s all gone to pot! London’s waterways have been overrun by a brutal and beautiful queenpin of crime. A menacing figure known only as the Hoodette is sending her henchmen along the river to distribute her new magically-produced drug. Unfortunately for them, the waterways are home to the Rivers of London – ancient gods and goddesses of the British capital who just so happen to have a very close friendship with newly promoted Detective Constable Peter Grant and his mentor, Thomas Nightingale.

Rivers of London Volume 7: Action At A Distance

Thomas Nightingale is one of the most highly revered magicians in Europe and a respected Detective Chief Inspector – but he holds a guarded past. His protégé, Detective Constable Peter Grant, is about to discover some of Nightingale’s deepest secrets, hidden within the archives of the London Metropolitan Police’s Special Operations Unit. Step back in time with Grant as he learns how Nightingale unravelled a mystery filled with murder, comic books, and atomic secrets that threatened to destroy Britain.

Rivers of London Volume 8: The Fey And The Furious

When a Mitsuibishi Eclipse washes up on the shores of the Netherlands, officers are surprised to find some unusual cargo in its boot. Fortunately, unusual cargo just so happens to be wizarding-cop Peter Grant’s speciality. Infiltrating illegal street races, Peter hopes to find the supplier, but instead quickly finds himself speeding into a whole new world of trouble, where old enemies wait.