Most have heard of the intriguing, ever expanding Millennium saga, whether by reading Stieg Larsson’s bestselling trilogy, its extensive screen adaptations (P.S. I highly recommend the original Swedish movie adaptations starring Noomi Rapace as Lisbeth Salander – a top notch trilogy), the David Lagercrantz sequels, or our wonderful comic collections adapted from the books. Regardless, all versions follow journalist Mikael Blomkvist and the incredibly kickass Lisbeth Salander – a private investigator/computer genius/criminal mind/punk rocker/freedom fighting, modern age warrior woman. She fights crime and her past abusers in this dark, thrilling Hard Case Crime saga.

Millennium Volume 1: The Girl with the Dragon Tattoo

“Sylvain Runberg and artist Homs have given us a near perfect adaptation of The Girl With the Dragon Tattoo. Hard hitting, gritty and beautifully illustrated, it is, without a doubt, the closest adaptation of the books you will find.” – Flickering Myth 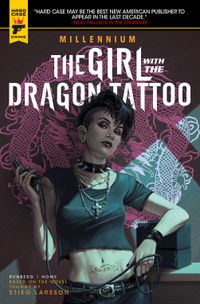 USA, and Canada and rest of world can order from Amazon

Millennium Volume 2: The Girl Who Played with Fire

Mikael Blomkvist, has decided to run a story that will expose an extensive sex trafficking operation between Eastern Europe and Sweden, implicating well-known and highly placed members of Swedish society, business, and government. But on the eve of publication, the two investigating reporters are murdered. And even more shocking for Blomkvist: the fingerprints found on the weapon belong to Lisbeth Salander. As Blomkvist plunges into an investigation to prove her innocence, Salander herself is drawn into a murderous hunt in which she is the prey.

“Those not familiar with the original source material will find it a compelling, edge-of-your-seat mystery in words and art, and fans of the original Stieg Larsson books will uncover new meaning his words and worlds.” – Multiversity Comics 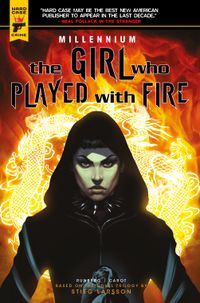 Millennium Volume 3: The Girl who Kicked the Hornet’s Nest

Lisbeth Salander lies in critical condition, a bullet wound to her head, in the intensive care unit of a Swedish city hospital. She’s fighting for her life in more ways than one: if and when she recovers, she’ll be taken back to Stockholm to stand trial for three murders. With the help of her friend, journalist Mikael Blomkvist, she will not only have to prove her innocence, but also identify and denounce those in authority who have allowed the vulnerable, like herself, to suffer abuse and violence. And, on her own, she will plot revenge–against the man who tried to kill her, and the corrupt government institutions that very nearly destroyed her life. Once upon a time, she was a victim. Now Salander is fighting back.

“This book is about empowerment and redemption. It is also worthy of the Hard Case Crime logo. The messages of the story come across loud and clear.” – Comic Bastards 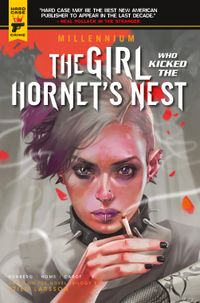 Millennium Volume 4: The Girl who Danced with Death

“I’m not going to be able to do this alone.”

Lisbeth Salander prepares to hack into a giant data centre, exposing the files of the Swedish Secret Service – but when her friend Trinity is kidnapped, she and old ally Mikael Blomkvist are set on a deadly trail of conspiracy… and a secret group known only as ‘Sparta’! 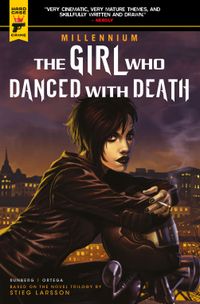