To kick off our week of Star Wars Insider activity, celebrating May the Fourth on Wednesday, we’re taking a trip through the 35 year history of the magazine and highlighting some key events and covers.

Looking to fill the gaps in your Insider collection, go here. Subscribe to Insider this week and you can save 44%! Get 8 issues for just $44.99 - saving $34.93 off the newsstand price - click HERE to subscribe and enter the promotion code MAY4. 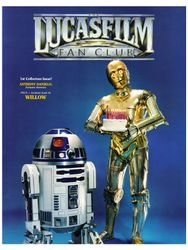 The first issue of the Lucasfilm Fan Club Magazine, published in the fall of 1987, featured R2-D2 and C-3PO holding a cake decorated with 10 candles - marking the tenth anniversary of Star Wars. 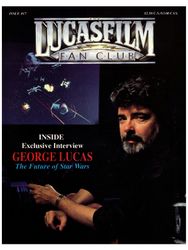 George Lucas discussed the future of Star Wars, and a possible timeline for the release of the first prequel trilogy. 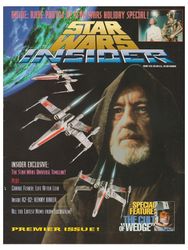 The first issue to be called Star Wars Insider hit newsstands in Fall 1994 and featured Sir Alec Guinness on the cover. This ‘premier’ issue included rare photos of the Star Wars Holiday Special, interviews with Carrie Fisher and Kenny Baker, and a special feature on the cult of “Wedge”.

1997 marked the twentieth anniversary of Star Wars and the theatrical release of the Star Wars Trilogy Special Edition. Insider celebrated these two very special events with an exclusive feature on the making of the Special Edition, and a brand-new logo for the magazine! 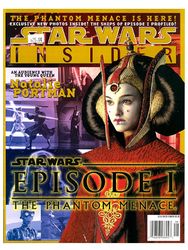 The 16-year wait for a new Star Wars movie was over. Insider was there to cover the release of Star Wars: The Phantom Menace (1999), gaining an audience with the young (then just 17 and in her senior year of high school), Natalie Portman, Queen Amidala, for an exclusive interview. 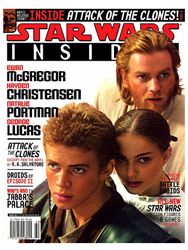 June 2002 and it’s ALL about Star Wars: Attack of the Clones (2002)! Readers could enjoy interviews with Ewan McGregor, Natalie Portman, Hayden Christensen, and George Lucas, plus a special report on what you may have missed the first dozen times you watched the second prequel! 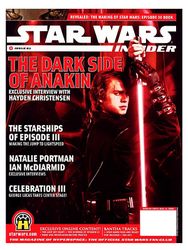 May 2005. Star Wars: Revenge of the Sith (2005) arrives in theaters and Insider’s cover marked Anakin’s move to the dark side. 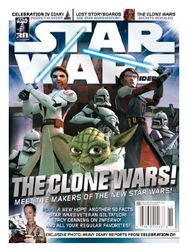 In July 2007 we got our first look at Star Wars: The Clone Wars, as Insider introduced us to the makers of the new animated show which would make its debut in theaters a year later. 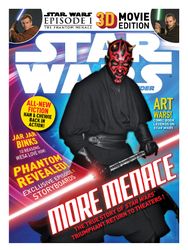 As the world donned their 3D glasses for The Phantom Menace’s triumphant return to theaters, Insider’s 3D movie edition took readers back to beginning with an exclusive look at the movie’s storyboards and 10 reasons why we love Jar Jar Binks. 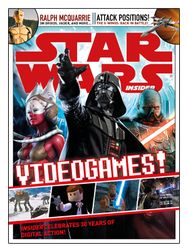 This issue celebrated 30 years of Star Wars videogames, from The Empire Strikes Back in 1982 to Kinect Star Wars, via arcades, TIE fighter simulators, The Force Unleashed and Knights of The Old Republic. 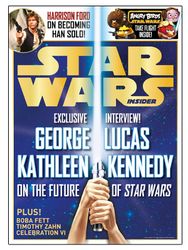 Just as this issue was going to press it was announced that Disney had bought Lucasfilm and that an all-new Star Wars movie trilogy was scheduled to be released in 2015. #138 included an interview with George Lucas and Kathleen Kennedy in which they revealed what was coming next in the saga. 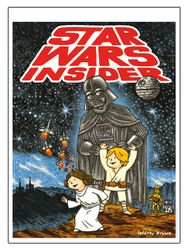 Jeffrey Brown’s artwork has charmed fans young and old and back in 2014 Insider approached him to take over the magazine’s cover. The result was this unique take on the original Hildebrandt poster from Star Wars: A New Hope (1977). 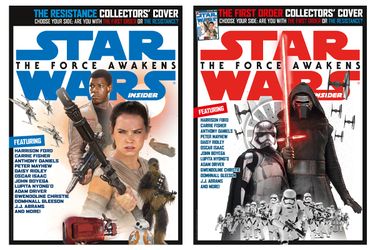 After years of waiting the sequel trilogy had arrived, Star Wars: The Force Awakens (2015) was in cinemas across the world and Insider featured interviews with the cast and crew in this celebration issue. 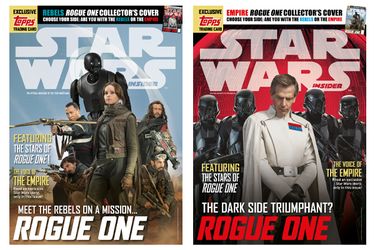 It’s December 2016 and with the release of Rogue One: A Star Wars Story (2016), we finally learned the answer to one of the saga’s most intriguing questions, how Princess Leia got her hands on the plans to the Death Star. The Insider covers for this issue allowed you to choose your side – the Rebel Alliance or the Empire? 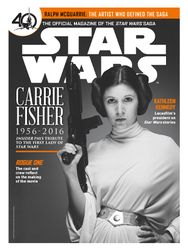 It was with sadness in our hearts, but happiness in our memories, that this issue of Star Wars Insider was dedicated to Carrie Fisher, the first lady of Star Wars. 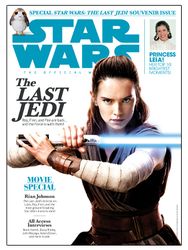 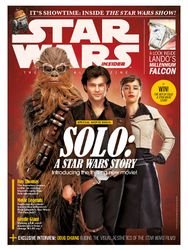 May 2018 introduced us to a young Han Solo and his Wookiee companion in Solo: A Star Wars Story (2018). Insider stepped aboard the Millennium Falcon when it was still Lando’s pride and joy. 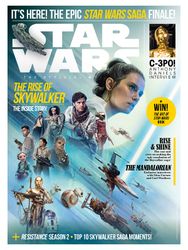 After a year revisiting each episode of the Skywalker saga, Insider arrived at Star Wars: The Rise of Skywalker (2019), the epic finale wrapping up over 43 years of Star Wars storytelling… but, what next? 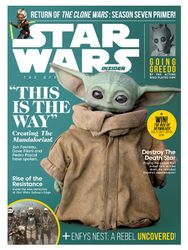 A new era for Star Wars as the live-action TV show Star Wars: The Mandalorian (2019 – present) becomes a critically acclaimed streaming hit and Grogu is our new obsession.

As #200 hit newsstands we looked forward to exciting times in the galaxy far, far away: exploration of The High Republic in the magazine, books and comics; new live-action shows; new movies and much, much more! 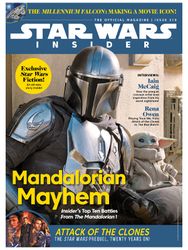