Assassin’s Creed: Bloodstone Vol 2 is out now for purchase and in it’s honour, we thought we’d take you on a little trip around the world of Bloodstone! Akihabara is a district of Chiyoda, Tokyo. It is known best for its countless stores selling electronics and anime merchandise. In 2009, Akihabara was recognized as one of the 100 Landscapes of Japan which best show contemporary Japan and its culture. After World War II, a black market at Kanda developed. What began as a host of electrical stores selling radio goods or some electronic component is now known as Electric Town! Geneva is the second largest city in Switzerland behind Zurich and the most international city in Europe with over 40% of its population coming from outside Switzerland. The main industries that flourish here are banking, inter- and non-governmental administration, technology, and tourism. Geneva prides itself as being one of the most beautiful and cultured cities in the world, combining the splendors of nature with a rich variety of historic and architectural offerings. Kyushu Island in Japan is the third-largest and southernmost of the four principal Japanese islands. The terrain is mountainous, and the irregular coastline creates many natural harbours. It is the most densely populated of the Japanese islands. The chief port is Nagasaki. Products the island is known for are: rice, tea, tobacco, fruit and soya beans. Lake Geneva is a crescent-shaped lake shared between France and Switzerland, and overlooked by the Alps. Geneva, the Swiss city at its southern tip, is a diplomatic hub with luxury shops and a cobbled old town. On the southern, French side, is the spa town and resort of Évian-les-Bains.

Ninh Bình is a province of Vietnam, in the Red River Delta region of the northern part of the country. The province is famous for a high density of natural and cultural attractions, including reserved areas in Cúc Phương National Park and Vân Long, their’s also grotto caves and rivers in Tràng An. The Alpine region of Switzerland, normally known as the Swiss Alps, represents a major natural feature of the country and is, along with the Swiss Plateau and the Swiss portion of the Jura Mountains, one of its three main regions. The Alps covers 65% of Switzerland’s surface area, however, Switzerland covers only 14% of the Alps total area. The Walter Reed Army Medical Centre was known as the Walter Reed General Hospital until 1951 – and was the U.S. Army’s flagship medical centre from 1909 to 2011. Located on 113 acres in the District of Columbia, it served more than 150,000 active and retired personnel from all branches of the military. The centre was named after Major Walter Reed (1851–1902), the Army physician that led the team that confirmed yellow fever was transmitted by mosquitoes rather than direct contact. The neighbourhood is a transport hub for commuters traveling in from the west of Tokyo as it is home to three popular train lines: the Shinjuku Line, the JR Yamanote Line, and the Tozai Line. Like neighbouring Waseda, the area is synonymous with students. Architecturally, the area around the station is dominated by the monolithic and appropriately named Big Box building. The building houses a sports gym, an arcade, inexpensive clothing stores, a cafe, restaurants, a 100-yen shop, and a bookstore.

Now incase you’re completely oblivious to the Bloodstone world, check out the details below! The secret struggle between Assassins and Templars hits the Vietnam War!

Tomo, one of the youngest members of the Japanese Assassin cell, has uncovered a conspiracy. More of a man of science than a man of action, Tomo investigates further, leading him to follow the footsteps of Assassins that operated during the Vietnam War. But what secrets will he uncover?

Part one of a thriller set in the world of Assassin’s Creed, from Guillaume Dorison (Assassin’s Creed: Conspiracies, Devil May Cry) and artist Ennio Bufi (They Made History). 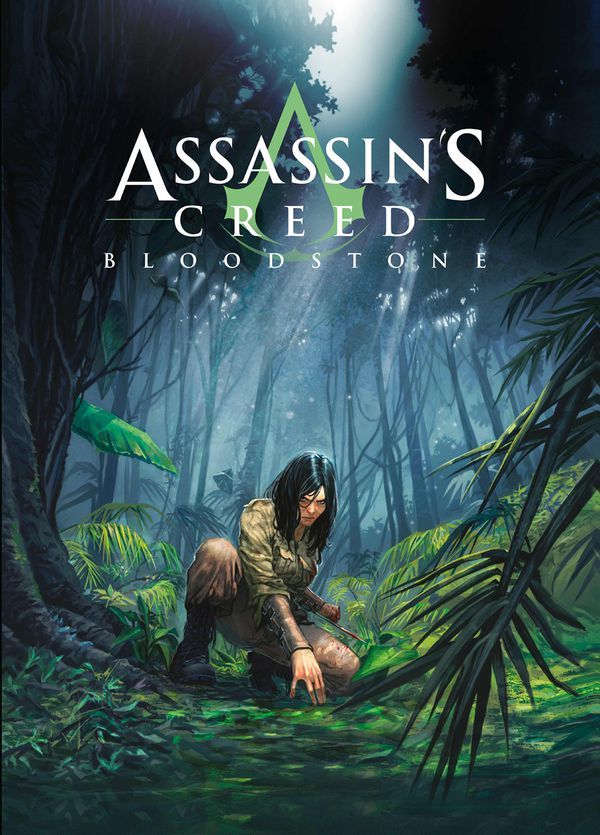 Tomo, one of the youngest members of the Japanese Assassin cell, has uncovered a conspiracy. In this thrilling sequel, what secrets will Tomo uncover in his ancestor’s memories? What horrific experiments took place secretly during the Vietnam War?