These boxed sets collect all nine of the graphic novels released to date – making a fantastic way to start your Rivers of London journey, the perfect gift for the Rivers fan in your life, and a very attractive addition to any bookshelf! As well as the fantastic graphic novels, each boxed set also incudes art cards featuring the cover art from each volume.

Rivers of London: Volumes 1-3 Boxed Set Contains Volume 1: Body Work, Volume 2: Night Witch, and Volume 3: Black Mould! Follow PC Peter Grant on cases that tackle the Most Haunted car in England; the missing daughter of a Russian oligarch and a monstrous forest creature; and something black and slimy that’s dripping through the walls of suburban London. 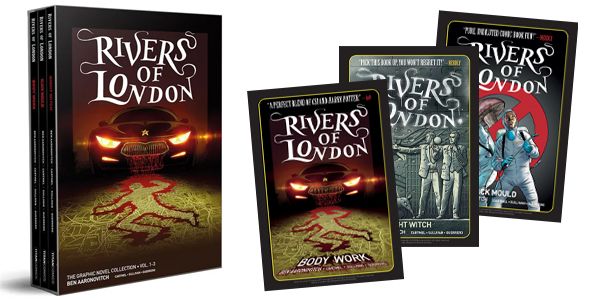 Buy today from Forbidden Planet and Amazon. Rivers of London: Volumes 4-6 Boxed Set Contains Volume 4: Detective Stories, Volume 5: Cry Fox, and Volume 6: Water Weed. Detective Stories is an anthology of tales told as Peter heads towards his Detective exams; Peter Grant has to gasp venture into the countryside in Cry Fox when vengeful Russian mobsters attempt to bring down the witch Vavara; and River goddesses Chelsea and Olympia find themselves drawn into a sordid cannabis-smuggling operation in River Weed. 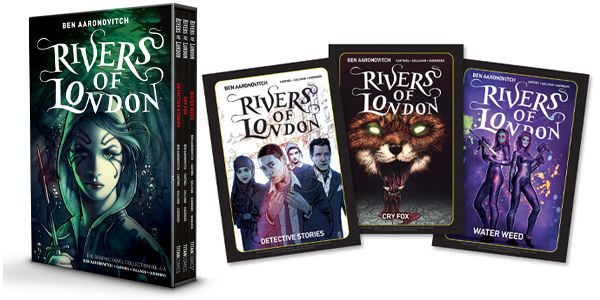 Buy today from Forbidden Planet and Amazon. Rivers of London: Volumes 7-9 Boxed Set Contains Volume 7: Action At A Distance, Volume 8: The Fey and the Furious, and Volume 9: Monday, Monday. October, 1957. A serial killer terrorising the women of Cumbria has moved to London, but this murderer has special abilities and there’s only one man who can match the madman’s power – Thomas Nightingale. Action At A Distance reveals secrets about Nightingale’s past that readers have long hoped to hear! When a flash car belonging to a young boy racer washes up in the Netherlands with a bagload of unusual cargo, it’s clearly a case for Detective Inspector Peter Grant, and The Fey and the Furious sees him sucked back into a real-life fairyland. And last, but not least, it’s the case of a Swedish Werewolf in London in Monday, Monday. 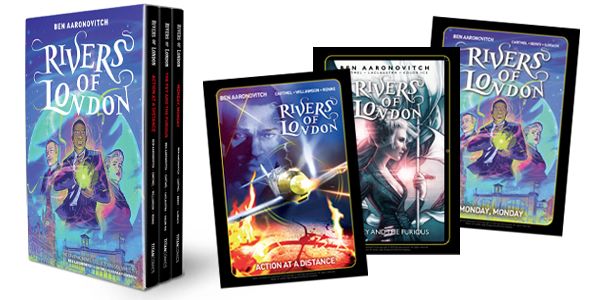