V. E. Schwab, one of Entertainment Weekly’s ‘Female Authors Who Rule Sci-Fi & Fantasy’, delivers a new series which expands deeper into the world of her bestselling novels Vicious and Vengeful.

Titan Comics: Your books have been highly successful both in comics and novels. What’s your secret to a great story? Victoria: I don’t write stories designed to appeal to everyone (because those stories don’t exist, and in trying to create them, you end up pleasing very few). Instead, I write stories for a specific reader, and that reader is always a version of myself, whether it’s 10 or 17, or 30-year old me. I don’t know what someone else was like as a kid, or a teen, or an adult, but I know exactly who I was/am and what I wanted/needed. This new comic is a never-before-seen story set in the years between two of your previous novels, Vicious and Vengeful. Can you give us a bit of background of what each of these books entail? The books grew out of the idea that if you took a real person – with all their shortcomings, and self-interests – and gave them superpowers, they would not suddenly become heroes. If anything they’d probably become villains. The story follows to pre-med students who discover that the key to such superpowers are near-death-experiences, and set out to manufacture their own abilities by controlling their suicides and resurrections.

As opposed to the Shades of Magic trilogy, Extraordinary is set in a world similar to our own (minus the superpowers unfortunately). Is it exciting basing your series in the modern world, or do you prefer fantasy environments? There are exciting elements to both! I always gravitate toward genre that’s grounded in realism, whether that means forging a system of magic that’s intuitively rooted to elemental nature, or designing an origin story for superpowers that’s strongly inspired by phenomena in medical science. The characters in your books aren’t always the best role models. Why do you think people are so interested in villains/anti-heroes.? I think that we don’t see ourselves as heroes. We rarely read a character and see ourselves in that character’s strengths, but we see ourselves in the weaknesses, the pettiness, the jealously, the desire to be seen. Because of that, I think we’re innately drawn to characters whose faults are given as much space as their points of pride.

What’s your favorite thing about writing for comics that you don’t always get when writing novels? It sounds obvious, but the visual element is so special. Working with an artist, getting to shave kindling onto the page in the form of my scripts, and what the artist strike flint and bring the whole thing to lie, never ceases to delight. What are you most looking forward to in terms of the art for this upcoming comic? I’m most excited to see the various powers, which have all existed in my mind for so long, finally to be given visual form. 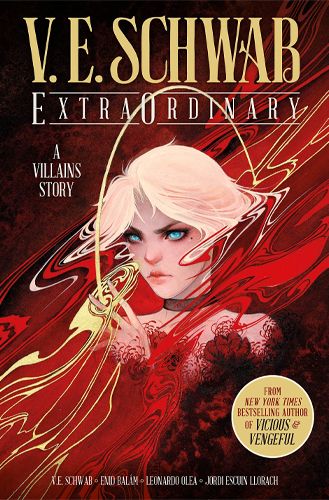