Enter a time of legends, where every man or woman’s fate is in the hands of the Gods.

“Thor was at our backs, granting us safe passage. The sea was calm, and our hearts keen…eager to return to this England…to honor the gods…to deliver a sacrifice worthy of their trust.”

Based on the hit MGM show Vikings, and written by Cavan Scott (Doctor Who, Star Wars), Vikings: Godhead, the first collection of Titan Comics’ Vikings comics is set between seasons 2 and 3 of the TV show.

Legendary descendent of Odin, Ragnar Lothbrok, once a simple farmer, now a Viking raider and King, brings a large community together to travel where no Viking has before, across treacherous seas and into the heart of England. Here they raid until an uneasy alliance with King Ecbert – much to the disdain of Ragnor’s raiders. And yet Ragnar continues to spearhead his community with his family at the helm – Lagertha the legendary shield maiden and their son Bjorn. Leading them all into a new era for the winter-harshened Vikings. 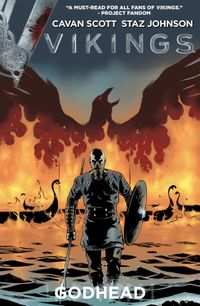 In Vikings: Uprising Ragnar and company recover from their raids upon Paris, taking large losses, despite Ragnar’s ingenious plots. Ragnar’s place as King looks increasingly uncertain as internal struggles and growing whispers of discontent threaten to topple him.

Lagertha, Ragnar’s former wife and powerful shield maiden faces chaos as her community struggle to come to terms with having a female at their head. 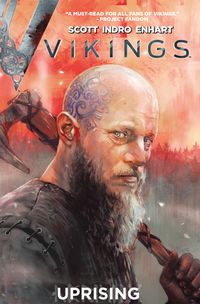 The thing that really brings these comics to life is the compelling characters that engross you from the first page. Not to mention the adventures and overall excitement the whole way through.

“Entertaining and intense” - Geeked Out Nation

“Thrills of guts and gores…” - Ain’t it Cool News

“This is every bit as good and fun as the television series itself.” - Reading With a Flight Ring

“A bold representation of this Viking world.” - Snappow