Star Wars Insider: When did you find out that there were going to be new Star Wars films?

Harrison Ford: It was a couple years ago, but I didn’t see the script until I started getting involved.

Did you need persuading to come back? I had a degree of self-interest. I was very gratified when I first saw the script and thought there were some amazing ideas; interesting things to do. Then I was very excited for the opportunity to work with J.J. Abrams again, whom I’ve known for a long time [Ford starred in Regarding Henry in 1991 which was written by J.J. Abrams].

You’ve known Kathleen Kennedy for a long time [working on the Indiana Jones films]. Was her involvement part of the attraction? It’s the story; it’s the movie that’s going to be made. Of course, people are a very important part of the mix and you have relationships with people that are very important. I have a very long and fruitful relationship with Kathy Kennedy, so I was glad to be able to work with her again. I thought it was going to be fun. I knew that it would be in good hands, but that wasn’t the only attraction to the project.

What did J.J. Abrams tell you about his vision? We had discussions about the development of Han and his relationship to other characters in the story. They were very interesting and encouraging conversations. Then there was some work done in respect of the questions I had or input that I had with J.J. Abrams, and I was pleased with that. But I’m a “get on at the beginning and off at the end” kind of guy, so I don’t really remember the street signs along the way.

Did you enjoy giving more input? We all had a certain amount of input once we got started. Over the course of making the Star Wars films, we worked with three different directors and each of them had a different style and different attitude towards the process. I would say that the relationship with those three different directors was different, but I always felt that there was a degree of collaboration that was comfortable for everybody involved. 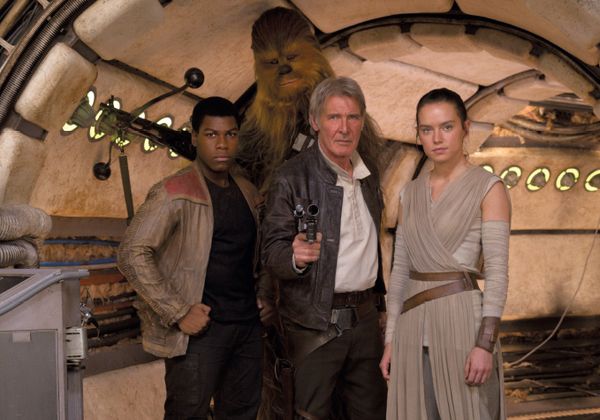 What was that like walking back onto the Millennium Falcon set. I spent a lot of years here, so it was fun to see it again. I didn’t remember it as well as I thought I did. There are things I remember about the cockpit and the funny stuff we went through. On the original cockpit, I asked George to let us get into it, so we could try it on for size. Finally, we did get a chance, Chewbacca [Peter Mayhew] and I, to walk into the cockpit. Of course, he couldn’t get into the seat! Flying it developed a little bit between iterations of the first three films, but it started to come back to me. It was fun.

Read the rest of the interview, plus co-stars John Boyega and Lupita Nyong’o’s thoughts on Ford in Star Wars Insider: Icons of the Galaxy – on sale now from Forbidden Planet and Barnes and Noble!